Protect your purchase for life! With our supplemental limited lifetime warranty, Classic Firearms will extend the manufacturer’s warranty to cover costs associated with the repair or replacement of defective parts of your item after the expiration of the manufacturer warranty for as long as you own the item (subject to terms and conditions). Click Here for details
Beretta 92FS 9mm Semi-Auto Pistol Factory New ( Police Special ) Model with 3 - 15 Round Mags
MPN: UKJ92F630  |  UPC: 082442051987 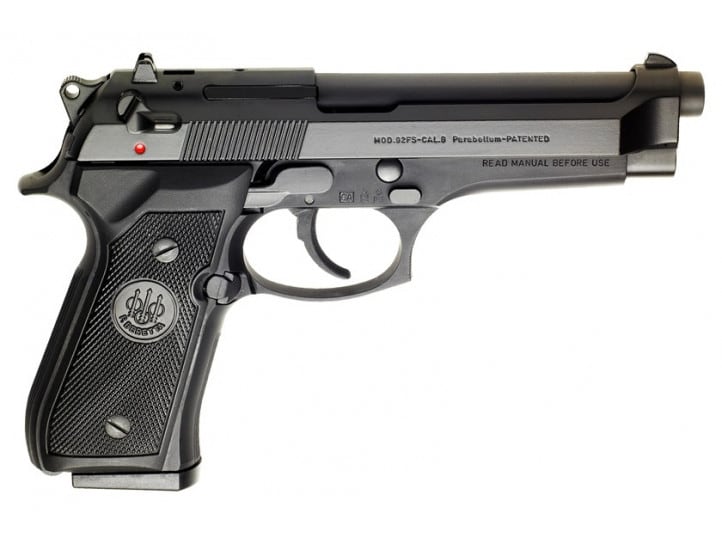 Beretta 92FS 9mm Semi-Auto Pistol Factory New ( Police Special ) model with 3 - 15 Round Mags - New * They call this the Police Special model simply because it ships from the factory with 3-15 round mags whereas traditional for commercial sales models only come with 2. We got a special deal on these at an industry trade show recently and we are passing the savings on to you.

The Beretta 92FS has been setting the standards for best military, police and tactical pistol for over a quarter century.
The reason is that it was designed--and has kept evolving--to be and remain the most accurate, durable and reliable semiauto handgun on the market. Easy to use, absolutely safe and delivering impressive firepower, it remains the sidearm of the US military and of allied forces the world over, as well as of countless police and law-enforcement agencies.
The 92FS is a double/single-action semiauto pistol that employs an open-slide, short-recoil delayed locking-block system, which yields a faster cycle time and delivers exceptional accuracy and reliability. In particular, the open-slide design practically eliminates “stove-piping” and helps flawless cycling and feeding even after thousands and thousands of rounds. The recently-renewed contract with the US military speaks clear: when it comes to dependability even in some of the world’s most extreme conditions, the Beretta 92FS still has no match. Period.
Regardless of the wonderful reputation it may have, the true test for a tactical pistol’s worth is at the shooting range. The 92FS consistently bests the US military requirement of a 10-shot group of 3” or less at 50 meters (just short of 55 yards). While this type of  match-grade accuracy is impressive, it is no magic. At Beretta, we know that absolutely precise tolerances keep performance consistent shot after shot—which not only gives the 92FS its extraordinary accuracy, but it makes all factory parts interchangeable within the same model. Couple this to the ability to reliably feed every variety of commercial ammunition, and it is easy to understand why the 92FS remains the best pistol in its class.

More about the Pstol. - The Beretta® 92FS is one of the most extensively tested and duty proven Semi-Auto Pistol designs in existence. The 92FS, or M9, has been the official sidearm of the US Military since the 1980s. The 92FS semi-automatic pistol has a durable Bruniton™ non-reflective black finish that provides superior corrosion resistance. Checkered grip panels provide a positive hold in all environments. The Beretta 92FS utilizes a short recoil, delayed blowback system, and an open top slide that virtually eliminate jamming. Disassembly latch simplifies fieldstripping the 92FS into 4 main components for maintenance. Spring-loaded, ambidextrous safety lever doubles as a decocking lever, and a visible chamber loaded indicator can be felt by touch. A reversible magazine release accommodates right- and left-handed shooters. The Beretta 92FS Semi-Auto Pistol is a rugged and reliable sidearm that makes an ideal choice for home defense, field carry, and recreational shooting. This is the Police model which basically just means that it ships with not 2, but 3-15 round mags. New in box with full factory warranty.