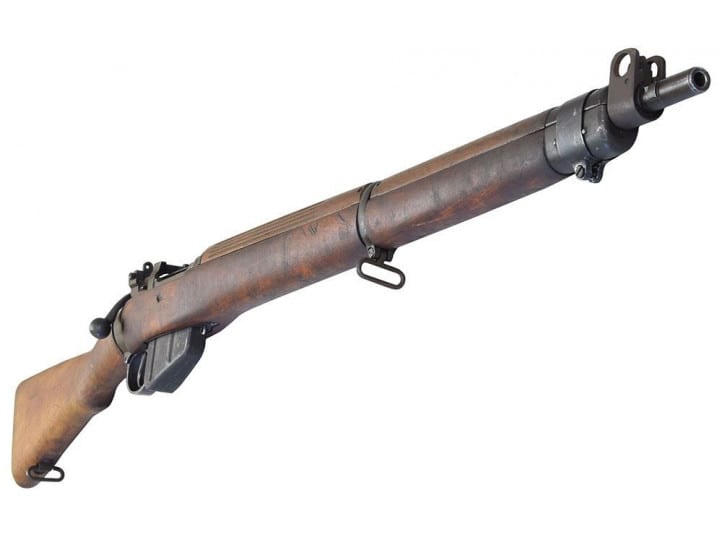 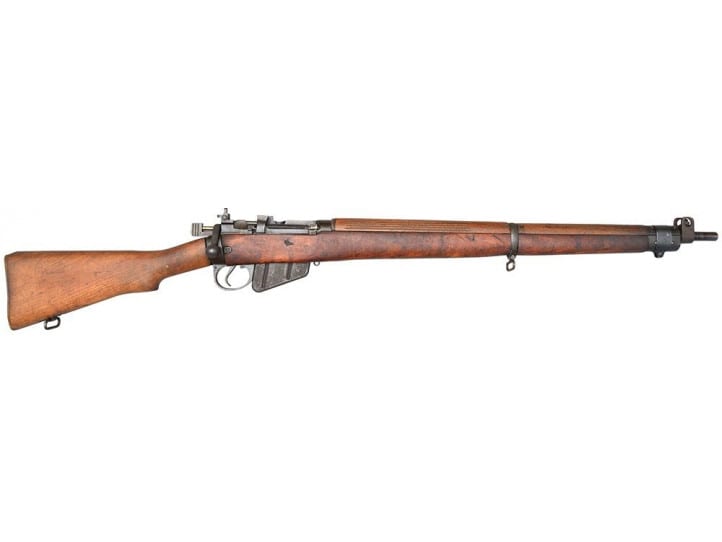 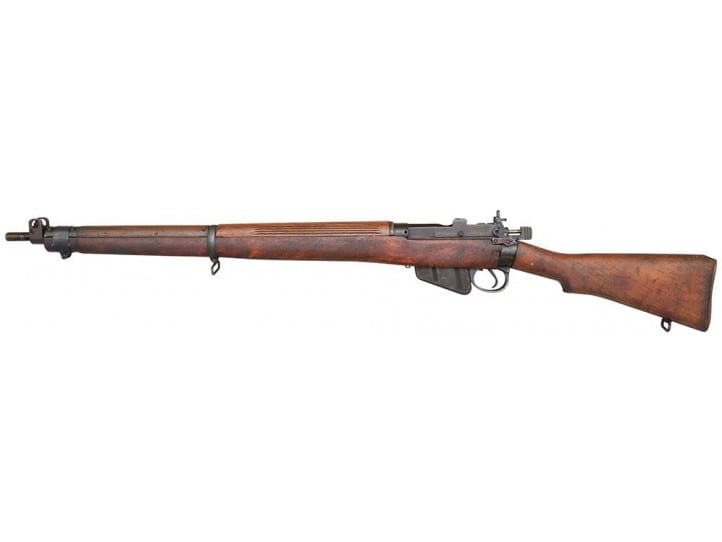 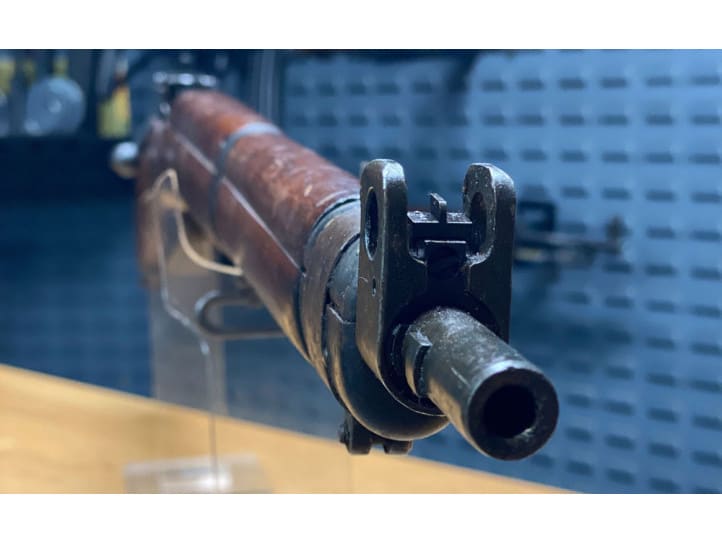 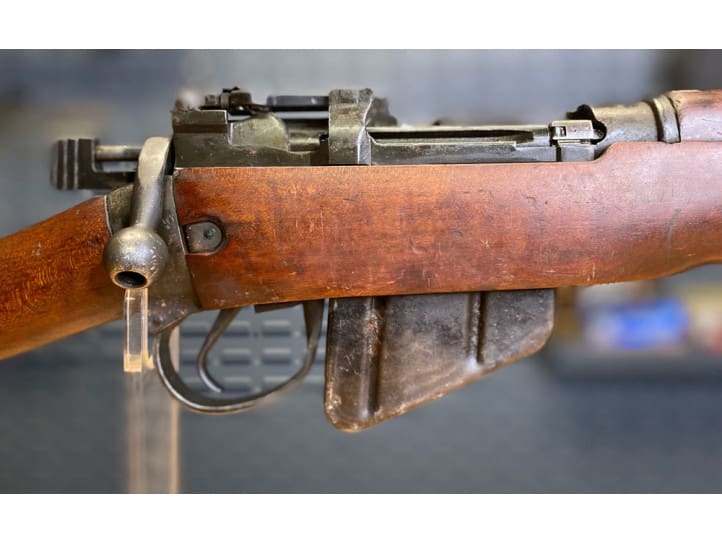 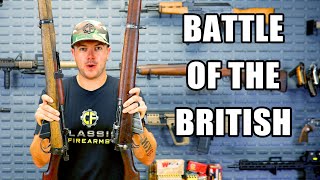 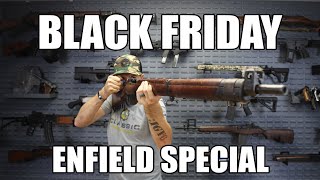 Historic British Enfield #4 Bolt Action Rifle in .303 British Caliber. They are in turn in condition which for Enfields means that that they are well used as most surplus Enfields are. That means dents, dings, scrapes, gouges, discoloration, and possible small cracks in the stocks. It will also mean bluing wear will vary and we have even seen some very minor surface rust on a few.  Having said that, don't let my overly honest description discourage you. We have been through this particular group of rifles and each one has been inspected thoroughly for condition. If it did not meet our condition standard for NRA surplus good then it was rejected and will not be sold under this SKU. Continue below for more complete details.
The Enfield #4 Rifle was the workhorse of the British Empire and they remain highly sought after by shooters, hunters, and collectors today.  - C & R Eligible -
Note - We may also have some Savage Mfg and Longbranch Mfg available below under the custom options while supplies last.
Hand Select Available for the best of 10 cosmetically.

Please see Detailed Description below for a solid overview as to what you can expect condition-wise on these rifles.

About the Rifles. These rifles were individually inspected by select members of our staff for condition as well as doing a multi-point dry fire inspection. We have them graded as NRA Surplus Good condition and we feel very confident in that grading. In other words, we set a certain threshold for our grading and any rifle that did not meet that threshold will not be sold under this SKU. Now don't get me wrong. These are not beauty queens, but they are good serviceable rifle. They are in original turn in condition which for Enfields means that that they are well used as most surplus Enfields are. That means dents, dings, scrapes, gouges, discoloration and possible small cracks in the stocks. It will also mean bluing wear ranging from a little to a lot depending on the rifle, and we have even seen some minor surface rust on a few, but that would be the exception and not the rule.  Overall they are not beauty queens but virtually no original turn in condition is Enfield is. They have simply been carried all over the world and will show use and character.

* About the Grading - Many times grading is a little skewed based on the type of firearm and I would say that these are overall good based on the typical condition of a surplus Enfield. Also know that when we say " Overall Good Surplus "  we are basing that on the group as a whole. There are certainly some rifles within the group that will fall on the high side of that grading meaning they could pass as Very Good, and some that will fall on the low side of Good, but anything that we would have deemed to be as low as Fair has been sorted out.

Within this group you can expect rifles with dents, dings, scrapes, gouges, discoloration and possible small cracks in the stocks. You can also expect anywhere from minimal bluing wear to a lot of bluing wear, and we have even seen some surface rust on a few. Any miror rust we have seen has been the exception, not the rule, and we have not seen any rust that would not clean up well.  We do offer a hand select for cosmetics that will offer you one of the nicer looking ones if that is your desire but please know that even a hand select is not going to be gorgeous.... just one of the better ones in the group and still a surplus good grade.  Also please know that these are a mixture of #4 MK1, Mk1* and MK2 rifles, with the vast majority of them being #4 MK1's. We don't make a distinction when selling them because the differences are insignificant but again,  there is a 90% plus chance that the rifle you get will be the #4 MK1.

We do not warranty bore condition as bores have not been inspected nor do we warranty for cosmetic's as we have tried to be as honest as possible in describing these rifles cosmetically. As such, if the possibility of receiving a rifle that is less than a beauty queen is a deal breaker, then don't order one. However, we do warranty them for function and we think that they are a tremendous value.

Don't let my overly honest description of the rifles fool you. We always try to allow for the lower end in the bunch when describing our surplus because let's face it, someone is going to get the ugliest one there. Having said that, we think that this is a really nice group of rifles overall at a fantastic price. Get yours today.

No collection is complete without the addition of an Enfield rifle.... Don't Miss This.......C & R Eligible

Note - We do offer a Hand Select Option on these rifles whereby we will select your rifle as the best of 10 comsmetically for an additional fee of $30.00.

Important - As noted above these are surplus turn in rifles and while we have done a dry function test here before shipping, the rifles have not had the bores cleaned nor have they been checked by a gunsmith. As with all surplus firearms the rifle should be thoroughly cleaned before firing. Also, please be sure that the bore is clear and unobstructed. Finally, a good rule of thumb with any surplus is to have your local gunsmith do a safety check before attempting to fire.