Protect your purchase for life! With our supplemental limited lifetime warranty, Classic Firearms will extend the manufacturer’s warranty to cover costs associated with the repair or replacement of defective parts of your item after the expiration of the manufacturer warranty for as long as you own the item (subject to terms and conditions). Click Here for details
Fostech Complete AR-15 Lower Receiver with ECHO Sport Trigger Factory Installed - Multi Caliber - Tungsten - 6100-TUN-4140 - BLEM
MPN: 6100-TUN-4140-BLEM  |  UPC: 082652081798
Typically Ships by Next Business Day if you order within the next 10 hours and 10 minutes 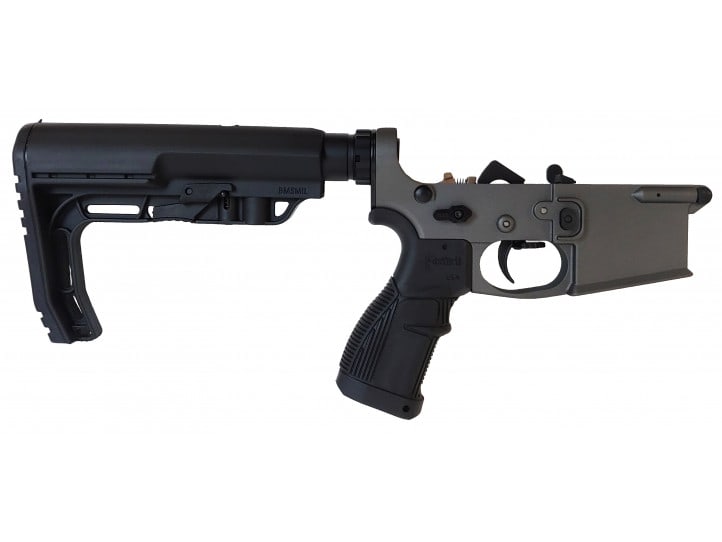 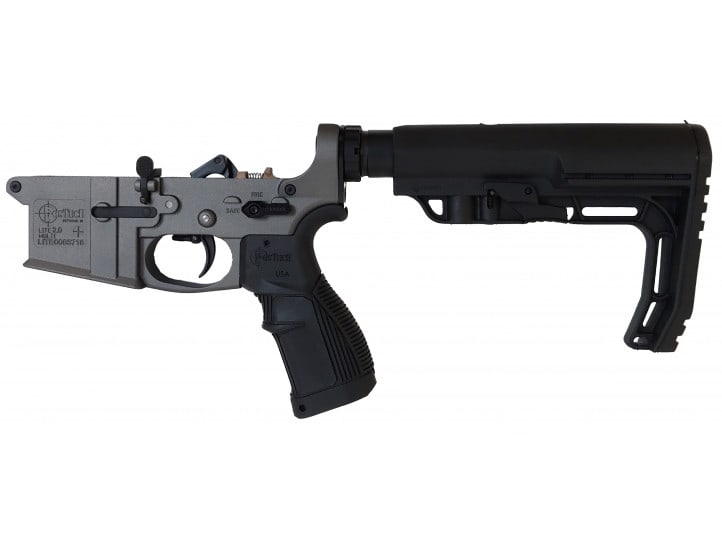 Fostech 6100-TUN-4140: Build the rifle of your dreams with this Fostech lower receiver. This receiver is made with Forstech's proprietary LITE material, making it 30% lighter than traditional aluminum receivers, and it is just as strong. Fostech fits this receiver with an MFT Minimalist Stock and their own Fostech Saber grip. The main feature of the receiver is, of course, the ECHO Sport binary trigger that comes installed. This trigger is amazing, to say the least. Three settings are safe, semi, and binary, which allows the gun to fire with every pull and release of the trigger. The speed at which you can send lead downrange is astonishing. This fantastic receiver is ready to be mounted with any AR-15 type upper receiver.
The Echo Sport is an economic binary pull and release trigger for the AR-15 Platform. The Echo Sport has the functionality of the Echo AR-II. The only difference is that you select the echo mode from a paddle rather than the safety sector. The Echo Sport is designed to function in the AR-15 Platform. The Echo Sport gives you all the functionality of the original AR-II at a more affordable price. In addition, it is more efficient, less complex, and, most importantly, less money.
Note - Fostech is listing these under a Blem SKU meaning that they will have a very minor cosmetic blemish of some kind that will in no way affect the function of the product. In our experience, this typically amounts to a minor run in the cerakote or a slightly different color variation than the norm. In most cases, we can not see why they are called blems. They ( Fostech ) have even told us that the blem in the finish could be hidden away due to it being on the internal surface of the receiver.
For a full description and more information please click on the SHOW MORE + tab below.

We think that this is one of the finest and most practical items in the firearms industry. By purchasing a Complete Fostech Echo Sport Lower, you can utilize virtually any AR-15 upper already in your possession and try out the fascinating world of binary trigger shooting in any combo of your choice. The receiver is multi-caliber so as long as the caliber your shooting feeds from standard AR-15 .223 / 5.56 based mags, you should be good to go. The receiver is fully assembled so all you should have to do is drop on a compatible upper and push the pins and you are ready to rock and roll in seconds. Note, the Echo Sport requires a Mil-Spec bolt carrier group which is common to approximately 95% of all AR-15 models on the commercial market.

A word about the " Blems" ... Whenever Fostech offers something under a Blem Sku it means that they have found a visible cosmetic imperfection during their inspection process. In all cases, the blemish will be cosmetic in nature only with the mechanics and function of the item still at 100% and all factory warranties will still apply. However, if this concerns you then the ultra-safe thing to do is don't buy it. Our experience has taught us that there are some people that will search over something like this with a magnifying glass until they think they spot the blem, and then it will keep them up at night because... well some folks are just like that. However, the reality is that the folks at Fostech are simply hyper-critical when it comes to their product and they will segregate an item and call even the slighted imperfection, that most companies would release as a first-run item all day long, a blem. In fact, they will sometimes separate out the entire lot over just a few pieces where they have spotted a minor cosmetic imperfection in the bunch. When we are able to discern what they are calling a blemish it is typically a small run in the cerakote due to overspray in a certain area on the receiver, and this area could even be... and in many cases is... an internal surface, where it can't be seen to start with. We have also seen them call perfect finishes "Blems", due to minor color differences between the shade of color that their color chart calls for, and what the end product resulted in. For example a Stealth Black, as opposed to a Midnight Black. Heck, black is black to me and industry standards in regards to shades in color vary wildly so I wouldn't ever consider this alone to be a blem, but hey, Fostech's attention to detail is what makes their products so desirable so if they want to offer Blem pricing on something so close to perfect, then we will be proud to pass it along.

The Echo Sport is different from Fostech’s Echo AR-II in that there’s an added paddle switch in front of the trigger to change firing modes from binary to standard semi-automatic firing instead of using the safety selector like the original Echo trigger. When the shooter is in the Echo Mode and depresses the trigger firing one round, the shooter can move the paddle to the semi position while firmly holding the trigger rearward and a second-round will not fire upon release.

Patent Pending new ATF Approved design. Not a single drop-in assembly like the original, the Sport functions with any full-auto style bolt carrier.