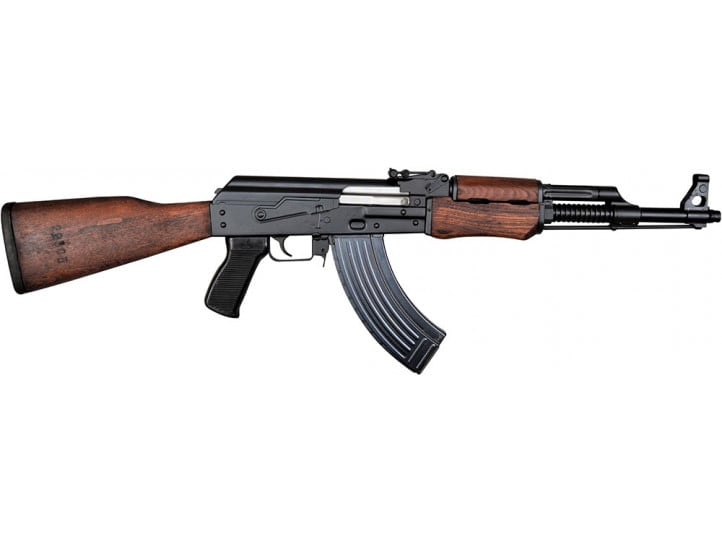 Yugoslavian M72BI RPK Carbine Style Semi Auto AK-47 rifle. These are the carbine variation of the Full Length RPK M72 rifles that we also offer elsewhere on the site.

These rifles are built by James River Armory from Original Grade A M72B1 parts kits utilizing enough US parts to make them 922rd compliant. Rifles feature a brand new U.S. made heavy finned 16 inch carbine barrel and a J.R.A. 1.5 mm thick heavy receiver. The resulting rifle is a Yugoslavian based rifle with all of the military spec quality of the original Yugo Zastava based sqad automatic rifle, in an ultra heavy duty ( Tanker ) style carry rifle. Semi-Auto, 7.62x39 Caliber, Accepts all standard AK-47 Mags and Drums.

Each rifle ships in a nice heavily padded rifle case for maximum protection, value, and convenience. The carry cases may vary in type from order to order based on availability, but they will always work great for carrying and storing the rifle as well as adding tremendous value to the purchase.

Yugoslavian M72BI RPK Carbine Style Semi Auto AK-47 rifle. This is the carbine variation of the Full Length RPK M72 rifles that we also offered elsewhere on the site.
These rifles are built by James River Armory from Original Grade A M72B1 parts kits utilizing enough US parts to make them 922R compliant. Rifles feature a brand new U.S. made heavy finned 16 inch carbine barrel and a J.R.A. 1.5 mm thick heavy receiver. The resulting rifle is a Yugoslavian based rifle with all of the military spec quality of the original Yugo Zastava based sqad automatic rifle, in an ultra heavy duty ( Tanker ) style carry rifle. Semi-Automatic, 7.62x39 Caliber, Accepts all standard AK-47 Mags and Drums.

The original M72 was a gas-operated, air-cooled, drum-fed, select fire, shoulder-fired weapon with a bi-pod. The Bi-Pod allowed it to also be used from a prone position in order to deliver suppressive or cover fire at a high rate of speed. It was originally used as a squad automatic weapon, like the Soviet RPK but it had unique design features such as the heavy finned barrel which allowed for maximum cooling under heavy fire, The B1 designation denotes the modernized version of the rifle with the heavy 1.5 mil stamped receiver with reinforcement ridges.

Ever since we introduced our original M72B1 long rifles our customers have been begging us to bring them this same rifle in a shorter more manageable 16" barrel i.e.
( Tanker ) version. Well, we finally got the new barrels produced to the original spec but in a shorter length and the rest as they say is history. The result is this New RPK Carbine and frankly we are awfully proud of it. There is just nothing like it on the market place. This rifle is built like a Mack truck and is not only tougher than nails and highly functional but it is simply as sexy as all get out. Not only a great collectors item but a fantastic rifle for practically any application. The rifle comes with (1) US made 30 round AK-47 magazine, and a one year warranty by James River Armory.

Please Note - All metal parts on this rifle have a new smooth blued finish and appear new. The wood furniture on these rifles consist of the Original Military Surplus stock set's. They have been lightly refinished and re-stained by James River Armory so the wood is considered nice but we do not call them new. All efforts have been taken to retain the original military look and feel of this firearm and just like the original stock's when issued the color and grain patterns will vary from rifle to rifle. Frankly I think that the stock finish being slightly less than uniform in some cases adds character to the rifle and I wouldn't have it any other way.

As a side note. The owner of James River Armory is probably one of the most foremost experts in past and present military rifles alive today. He is a former Marine and his passion and every waking moment seems to revolve around firearms. A very interesting guy to say the least. In describing this rifle to me he mentioned some film footage that he saw from the Afgan / Soviet war showing the Mujahideen guerrillas taking captured Soviet RPK rifles and shortening the barrels to make an easily carried heavy duty battle AK. His eyes light up when he talks about these builds and compares them to those, but these are even better because all of them have brand new high grade U. S. barrels which by AK standards are extremely accurate. Not only that but talk about solid, lay one of these beside a standard AK rifle and you tell me which way to go. It looks like a Humvee next to a Tonka truck.

Rifles come with a thread protector rather than a compensator because that was how the originals were. However, if you want a compensator the threads are still there and all 14x1 left hand threaded standard compensators will fit.

These will be a limited run simply because there are only so many part's set's available. Get your now.