Protect your purchase for life! With our supplemental limited lifetime warranty, Classic Firearms will extend the manufacturer’s warranty to cover costs associated with the repair or replacement of defective parts of your item after the expiration of the manufacturer warranty for as long as you own the item (subject to terms and conditions). Click Here for details
Chinese SKS Type 56 Rifle - Original Military Turn In Rifles. 7.62x39 Semi-Auto W /Spike Bayonet - C&R Eligible
MPN: chicom-sks  |  UPC: ITM468 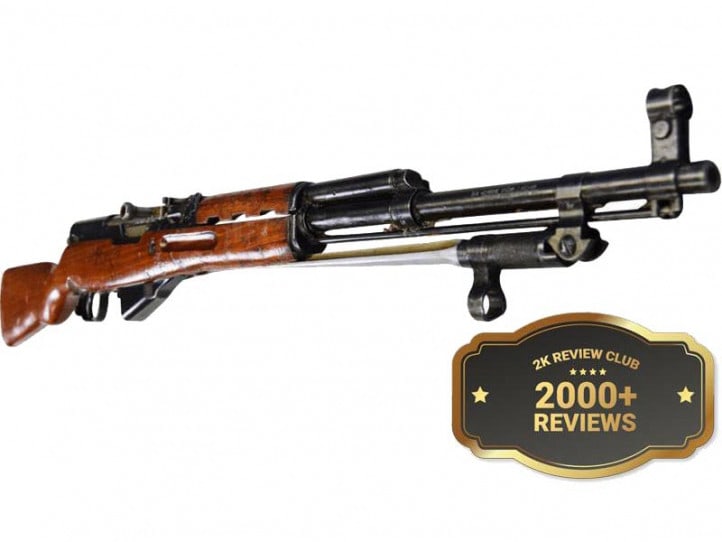 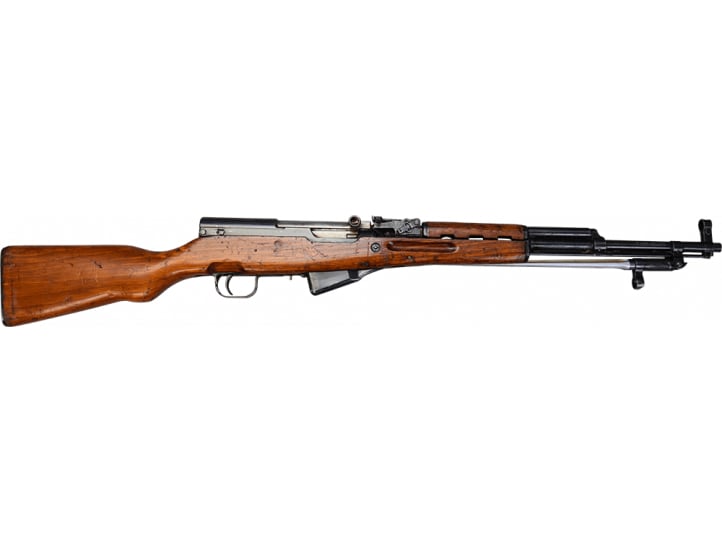 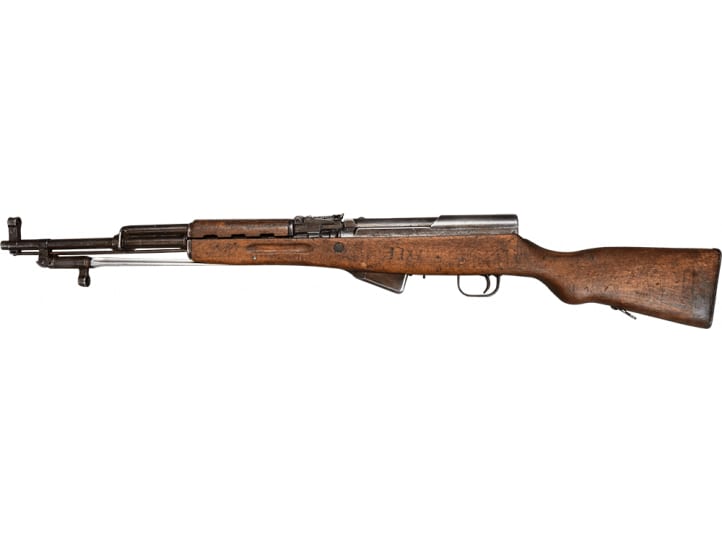 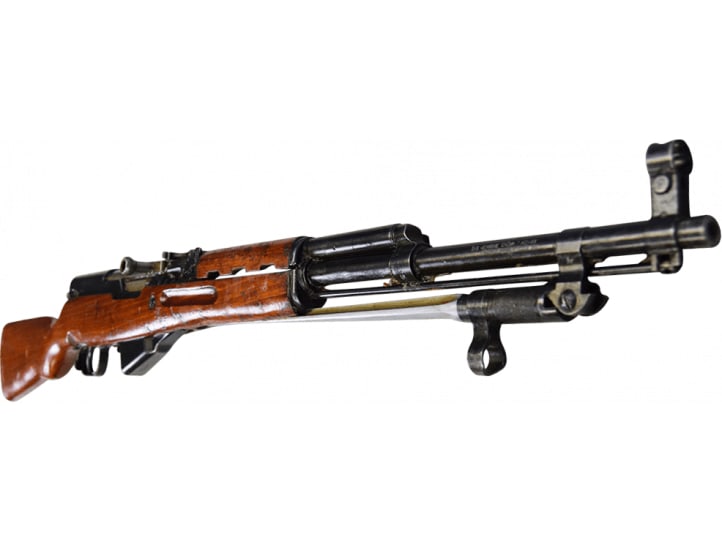 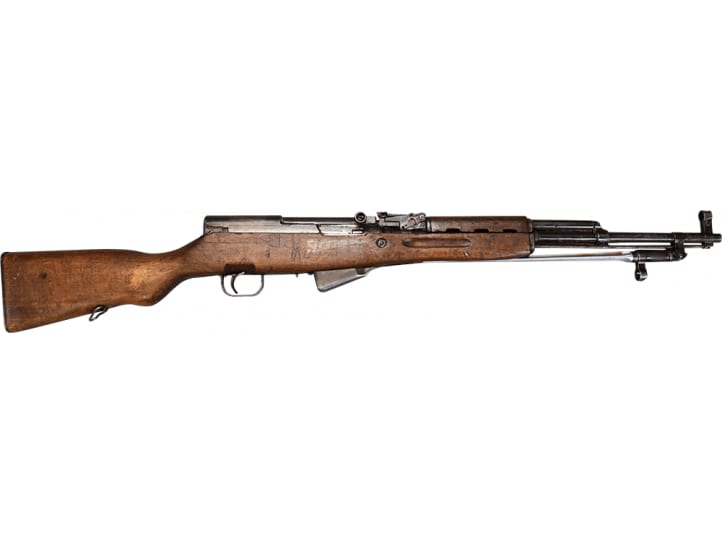 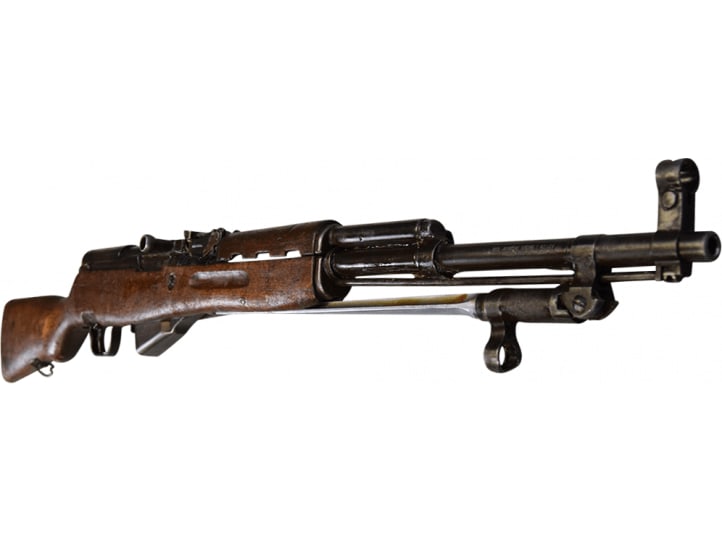 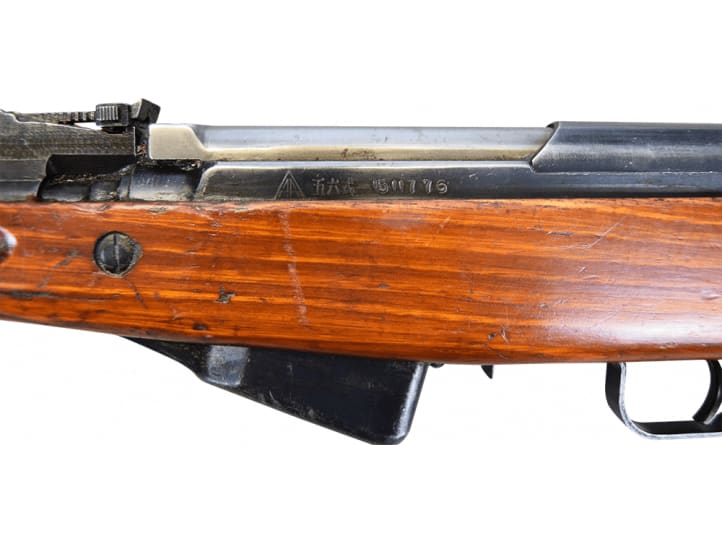 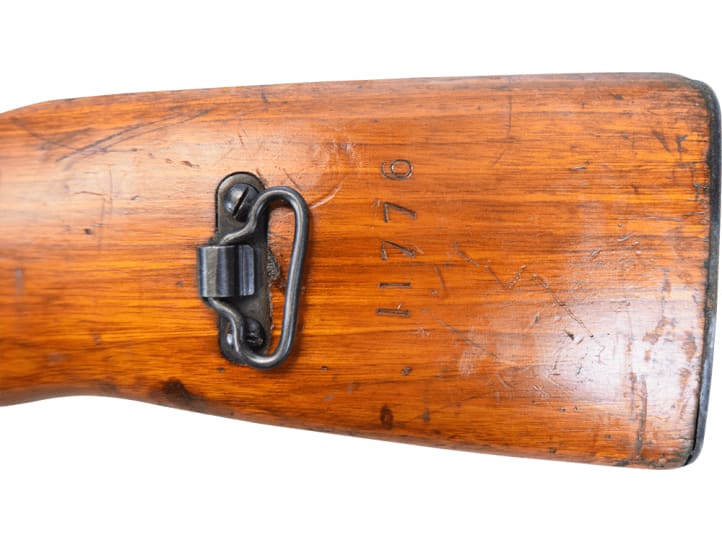 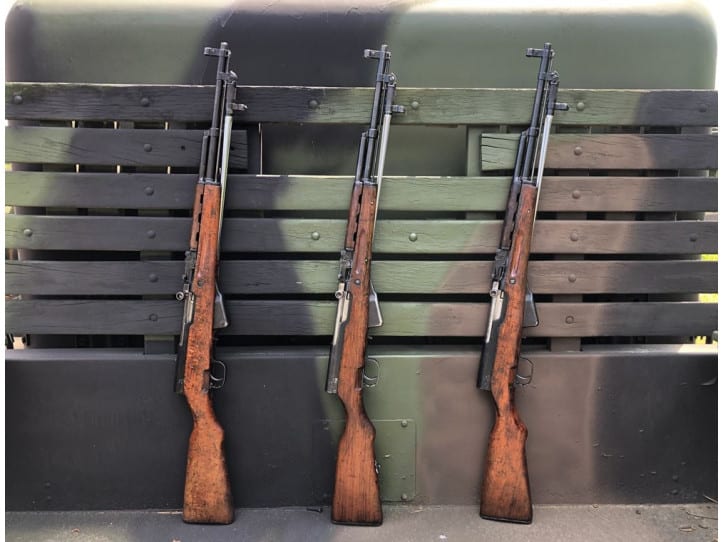 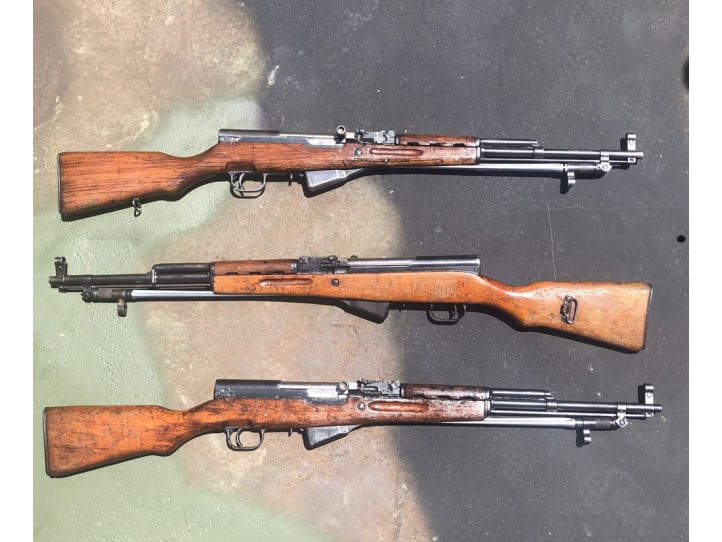 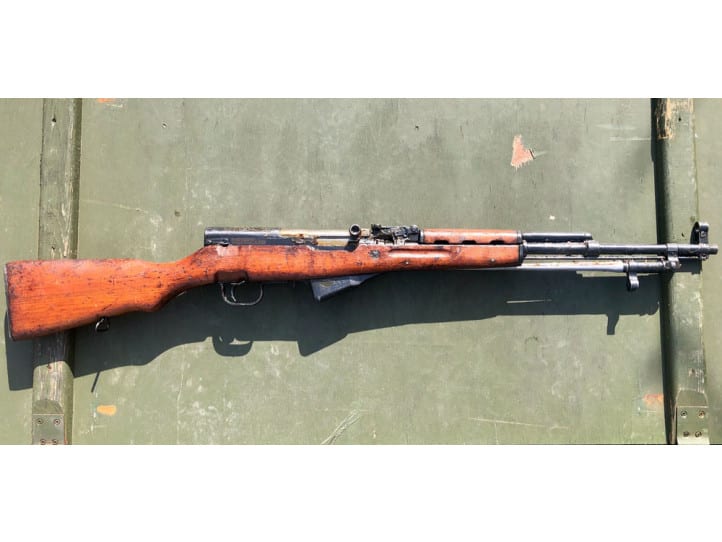 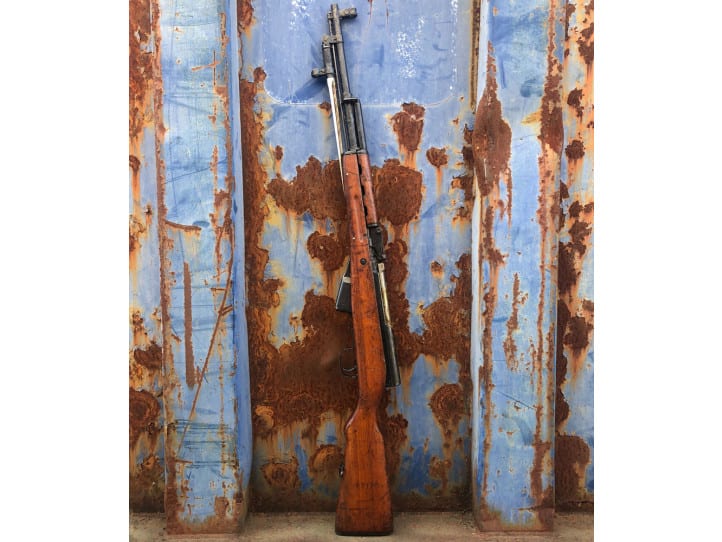 How To Clean, Disassemble and Reassemble a Chi-com SKS
20:06 | 3 years ago

How To Clean, Disassemble and Reassemble a Chi-com SKS
20:06 | 3 years ago

Original Chi-Com Vietnam Era Military Surplus Type 56 Chinese SKS Rifles Manufactured at the famous Jianshe Arsenal #26  7.62x39, semi-auto. These rifles include a 10 round box magazine, and spike type folding bayonet. Well used and will show their history but highly functional and very cool! These are military turn-ins, so expect some battle scars. They are stored in heavy cosmoline. Several Custom Options Available - See extended description and video for further details on the rifles.

These historic and highly popular Chi-Com rifles were banned from importation by the Clinton Administration in the early 1990s. This small group of rifles was stored in a neutral country for over 20 years before being granted an exception for import and is now here at Classic Firearms for sale to you. Rifles have been stored in heavy cosmoline and as such, are well preserved but will be in turn-In condition.

Rifles are complete and functional but expect varying degrees of bluing wear (some heavy, some less), and stocks with dents, dings, scratches, dings, gouges, and discoloration from service use, handling, and storage.  Further, concerning the stocks, most stocks are solid, but some may have small cracks or in some cases, even a little trench art.  We have not found any that are broken or unsafe to use as these have all been sorted out by the importer. You can expect a good solid shooter but in most cases, not a pretty stock. However, we have done a thorough inspection on these, and there are a lot of exceptions to that rule as many are quite nice, so the cosmetic condition is pretty much all over the place. I even found some that looked darn close to being unissued with really nice stocks and 100% blue, but those were the exception... not the rule. Overall I would say that these guns average about 70% of new condition cosmetically. Now I like the way they look overall, and many are pretty nice but to be clear, and so nobody can say we didn't represent them accurately, there are several ugly stocks in there, so expect an ugly stock.

The same goes for the bluing, however, to a far lesser extent. We have seen some guns with excessive bluing wear, but I would say that is the exception as most of these guns are running 80% plus in the blued department, with many being closer to 100%. The good news is we did not see any rust on any of the rifles (at least above the stock line), and due to the amount of cosmoline on them, I don't think you will.

We do offer a hand select in which we will pick the best of 10 from any particular group. Now remember, the more rifles that sell, and the more hand selects are drawn from the lot, the lower the standard for the hand-select will be even though it will still be the best of 10. As such, the early bird gets the worm, so to speak on the best of the hand selects.

Some stocks may have trench art (field carvings) in the stocks, as represented in one of the images above. We are not disqualifying these carvings from hand selects as some collectors prize these, and many consider this field art extremely desirable. We also do not exclude a slight repairable crack in the stock from qualifying as a hand select as the rifle may be head and shoulders above the others in its group otherwise.

Important Safety Warning - Please note, as with any surplus firearm, we advise that you have the rifle inspected by a competent gunsmith before firing. In addition, all cosmoline needs to be thoroughly cleaned from the rifle... especially from the bore, the gas system, trigger group, and the bolt group, and special care needs to be taken to ensure that the firing pin moves freely within the lower bolt.

These are all very early rifles -  i.e. Pre Vietnam to Early Vietnam Era rifles which probably saw use in that conflict... As original early military rifles, they contain Mil-Spec parts based on the manufacturing protocol in use by that particular military contract factory during the time period that they were produced. All of these rifles have a barrel lug, which can be seen between the rear sight and the receiver, indicating that they are threaded in rather than pinned in barrels. In addition, many of the trigger groups are milled but some are stamped and the type of trigger group received will be luck of the draw.

On the vast majority of these rifles (probably 70%), all of the visible serial numbers on the primary metal parts of the rifle, i.e., the bolt, receiver, etc., are matching. Therefore, if you order any rifle you run a very high chance of getting one with all matching original serial numbers. However, we only guarantee matching #'s if you select the custom option to have us look for matching #s.

Please know that a matching # rifle may not look as good cosmetically as one that does not have matching #s. Therefore if you want the best of 10 cosmetically, as well as all matching serial numbers, you will need to select both options. Most that we have seen have a cleaning rod; however, we do not guarantee a cleaning rod with every rifle. All will have a folding spike type bayonet. The SKS rifle fires 7.62x39 ammunition from a 10 round box magazine, but detachable high cap mags are inexpensive and very easy to obtain.

When we first started in business in the late '80s, we sold thousands of Chinese SKS rifles, and as such, I have a soft spot for them. They will always be my favorite. Aftermarket stocks, magazines, and accessories are plentiful and easy to install, and they are just plain cool guns. Don't let my overly honest description fool you. I have intentionally been hypercritical. I have tried to paint a worst-case scenario because we want to be brutally honest as to the worst possible case scenario, and we do not want to deal with returns due to not meeting your expectations. We learned a long time ago that even though we tell folks that any rifle is a well used surplus former military rifle that has been drug through the mud and the blood, they still somehow expect to get a brand new Belgium Browning. As such, we would instead portray the worst case and have you pleasantly surprised upon receipt than vice versa. In truth, I like what I have seen in these so far, and I think that as long as you know, going in exactly what they are, that you will be pleased with them too. Thus the super long description. All of the guys on staff have seen these and commented about how much better these look than the small group we had a couple of years ago, and how they think folks will be even happier with these, and these guys are all shooters and gun nuts.... that is always a good sign.

The SKS is historically significant and makes a fine addition to any collection.