Protect your purchase for life! With our supplemental limited lifetime warranty, Classic Firearms will extend the manufacturer’s warranty to cover costs associated with the repair or replacement of defective parts of your item after the expiration of the manufacturer warranty for as long as you own the item (subject to terms and conditions). Click Here for details
M1 Carbine Rifle, .30 Caliber, Semi-Auto, Original U.S. Military, Saginaw General Motors - C & R Eligible - NRA Surplus Good Condition.
MPN: M1-Carbine Saginaw  |  UPC: ITM276224 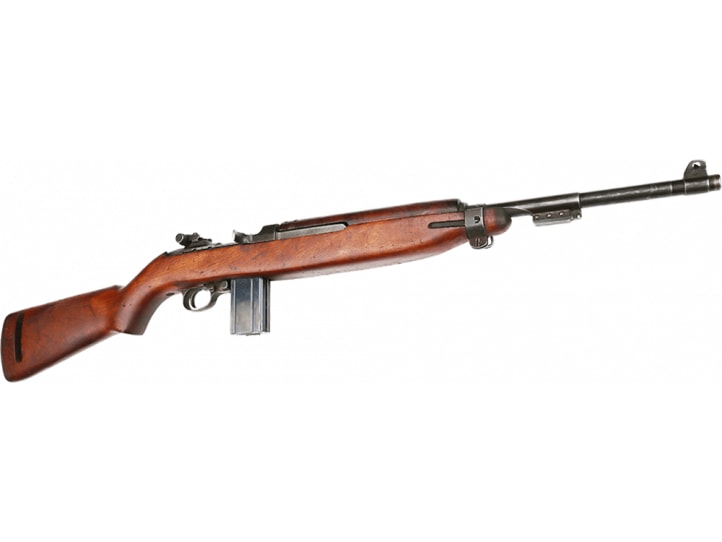 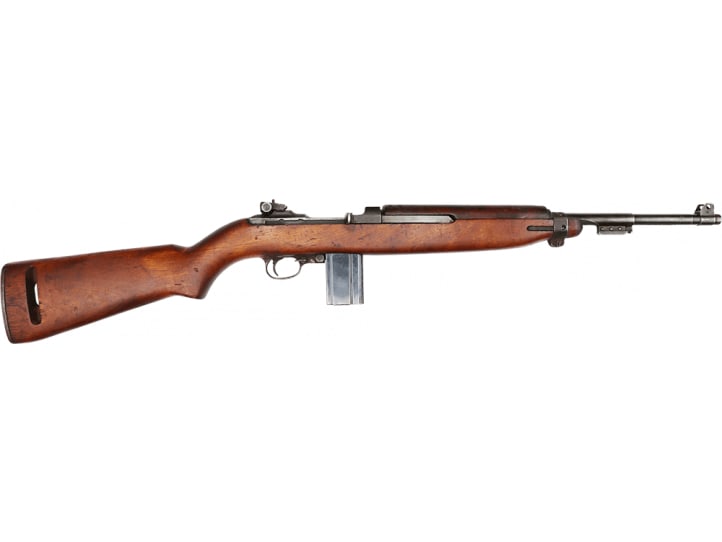 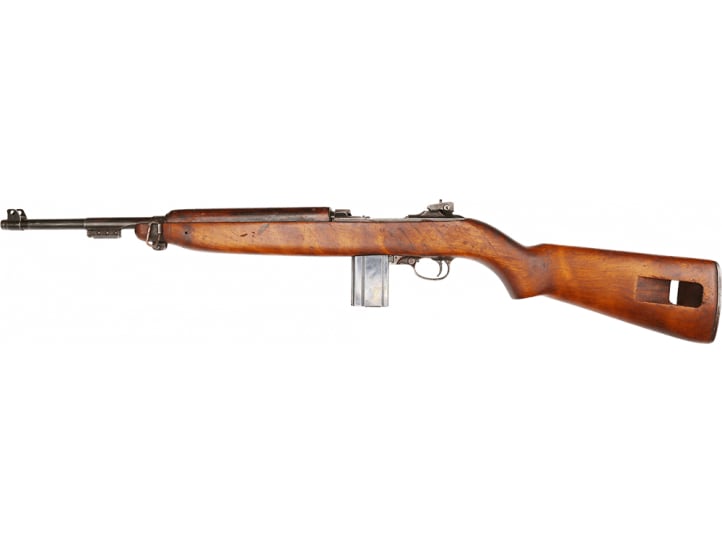 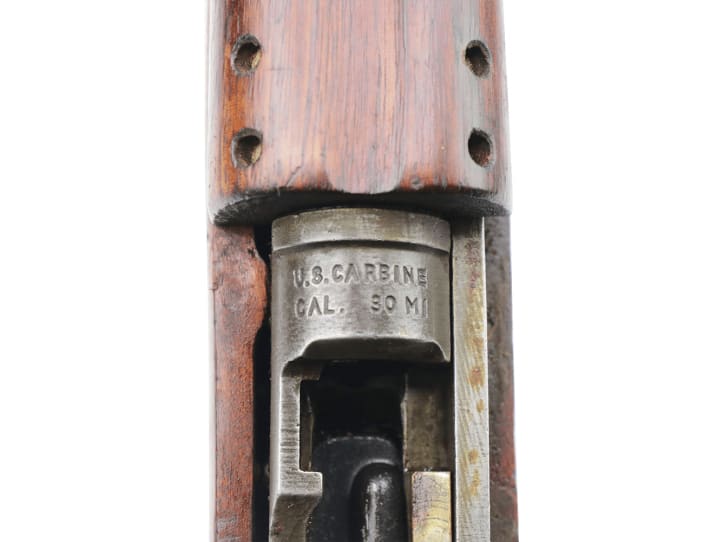 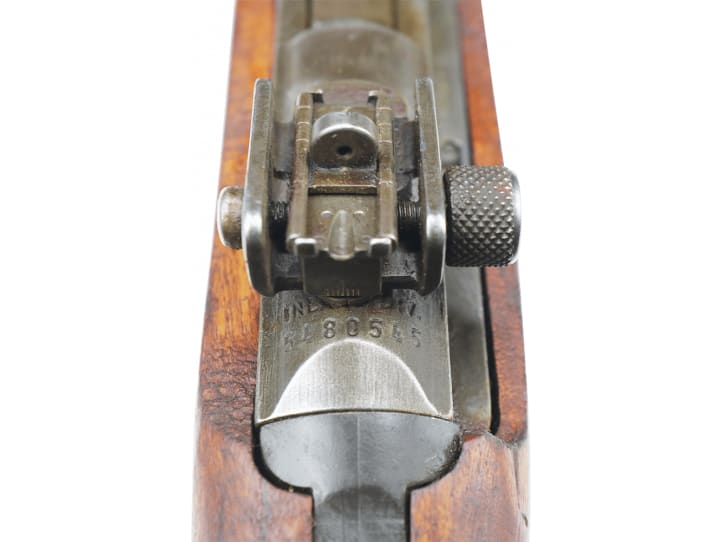 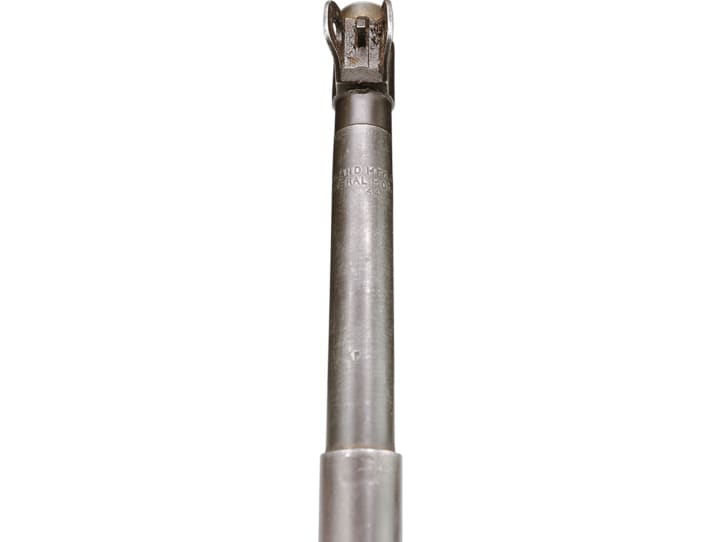 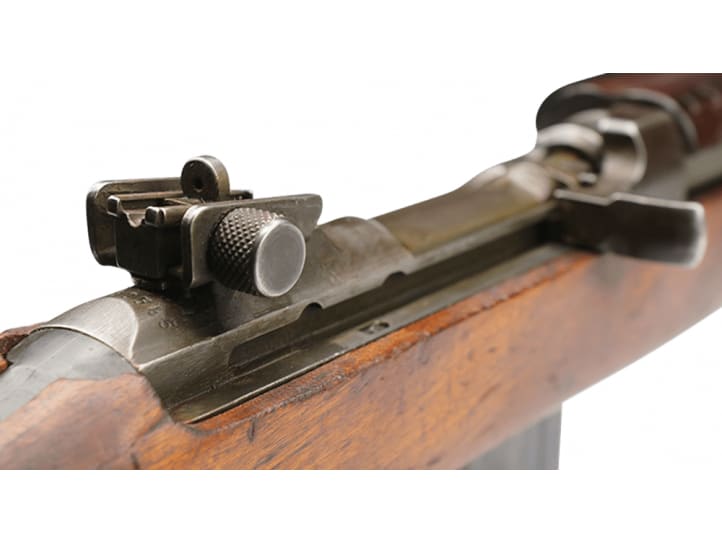 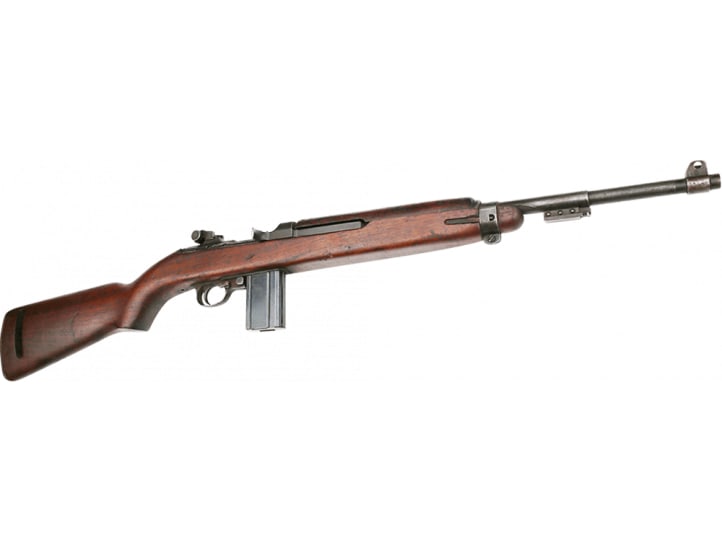 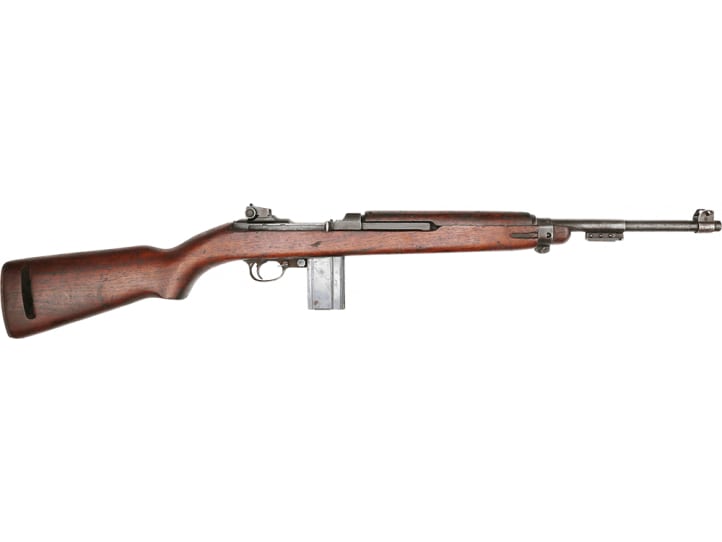 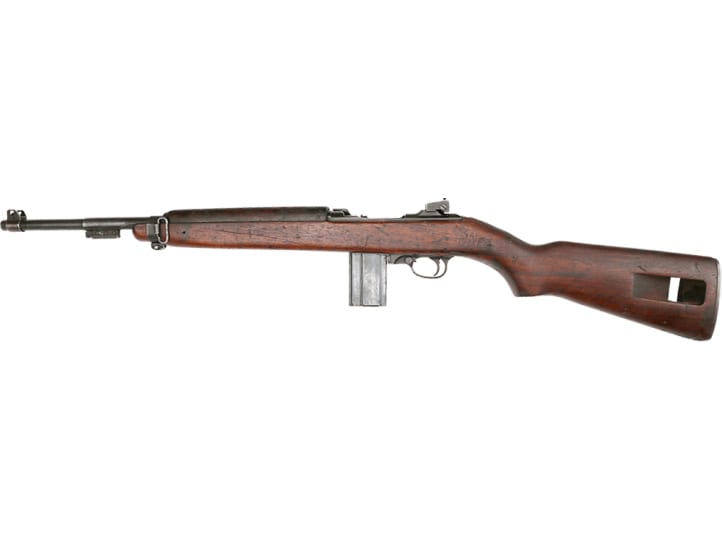 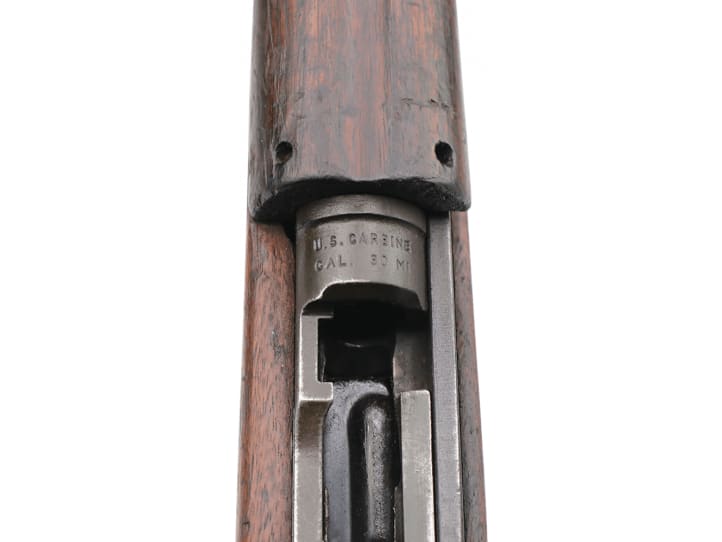 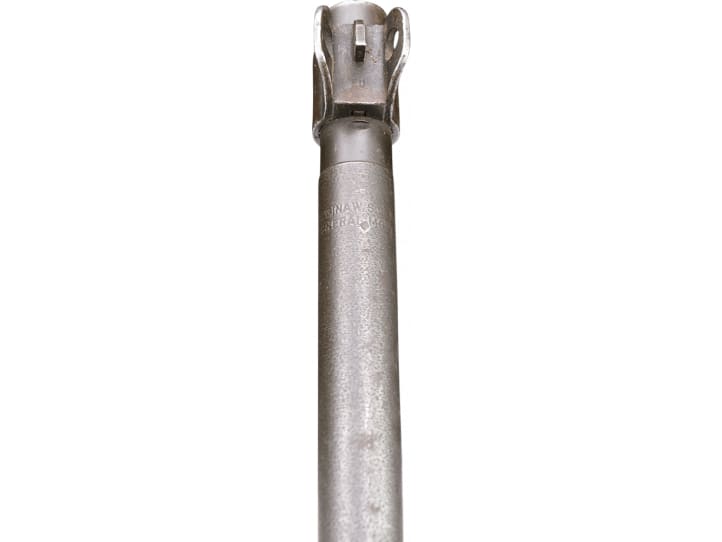 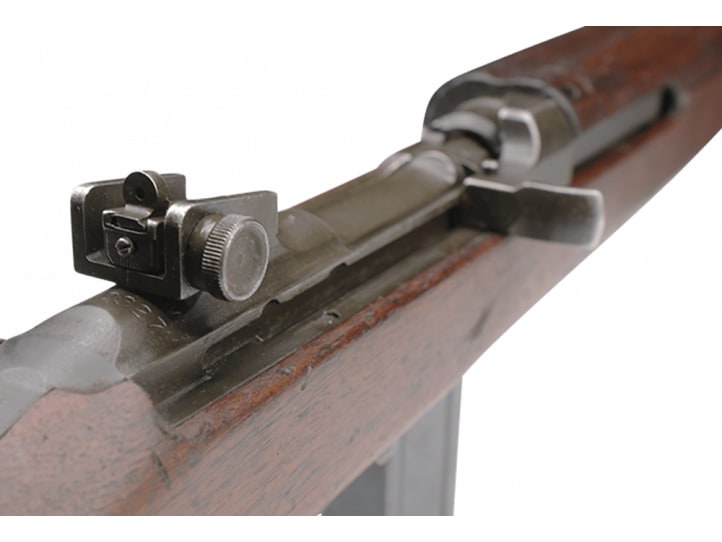 M1-Carbine Rifle, .30 Caliber, Semi-Auto, Original U.S. Military Rifle. These were manufactured for the war effort by the Saginaw Steering Gear Division of the General Motors Corporation in either Saginaw or Grand Rapids Michigan. The Saginaw manufacturing plant was multi-faceted and very valuable during the war effort. In addition to M1 Carbines, during WWII Saginaw Steering Gear manufactured Caliber .30 Browning Machine Guns (i.e. M1919A4), Oerlikon, and BOFORS guns, tanks, tank destroyers, vehicle subassemblies, and armor-piercing projectiles. They operated two different facilities, one in Saginaw and one in Grand Rapids, and between the 2 facilities, they produced a total of 517,212 M1 Carbines. C & R Eligible

These were original WWII Era M1 Carbine rifles that were stored overseas for years before recently being re-imported back into the United States.  Rifles have and are being sold under their original serial numbers and have not been importer re-marked. Overall condition is a solid NRA Good Surplus condition with some at the top end approaching Very Good. We do offer a hand select option for the best of 10 while supplies last We had the opportunity to inspect these rifles before purchase to assure the grade and quality and are pleased to be able to offer them here. Each rifle ships with one new aftermarket replica of an original 15 round magazine. See a more complete description below by clicking SHOW MORE + for more details and custom options.

M1 Carbine Rifle, .30 Caliber, Semi-Auto, Original U.S. Military rifles manufactured by the Saginaw General Motors plant. Although the company was known as the Saginaw Steering Gear Division of General Motors, Saginaw rifles were also built at a plant in Grand Rapids Michigan. An interesting fact about the facility at Grand Rapids was that the carbine production operation there was initially operated by Irwin-Pedersen. When the carbines they produced failed to pass muster with U.S. Army Ordnance, the Irwin-Pedersen carbine contract and the Grand Rapids facility were turned over to Saginaw Steering Gear and operated as a second Saginaw M1 Carbine production facility. Saginaw carbines were ultimately considered some of the finest M1 Carbines ever produced. These rifles are all C & R Eligible.

About the condition - These are surplus rifles that have been stored for a number of years, in their original turn in condition. As such, expect some dings, scratches, nicks, etc, on the wood, and of course varying stages of bluing wear. Having said that, the rifles we selected had to reach a certain minimum threshold that we felt justified the price before we would accept the rifle and we tried to keep our standards pretty high in terms of our cosmetic grading. A few of the rifles may have very minor non-function inhibiting cracks in the furniture but if they exist they have been inspected here and deemed to be not significant enough to adversely affect the grading.  We also did a multi-point dry function test to ensure that the rifles would be in good working order. Also, while we never guarantee for bore condition, we did clean several bores and the bores cleaned up quite nicely on all of the guns that we randomly sampled to run a brush through. Frankly, I think we have hit a home run here. Each rifle ships with one new aftermarket replica of an original 15 round magazine. Don't miss this.

Additional Custom Option - When going through the inspection process we discovered some M1 Carbines that were in the "transitional period" configuration. These rifles feature the Type 1 or Type 2 barrel band (without the bayonet lug) and may have either the Flip-Over style rear sights or the  Type 2 or Type 3 adjustable rear sights, depending on the individual firearm. These guns most commonly have the push-button type safety, although a few do have the more standard flip lever style safety. These rifles are an interesting piece of history and show the many configurations of the M1 Carbine during WWII. They are also a much rarer variation and are perfect for completing or adding a different style M1 Carbine to your collection. Unfortunately, the differences in the sights and safeties are too numerous and fall in too many combinations to allow us to offer specific custom options for each so those characteristics will be luck of the draw, however, the common denominator will be the lighter weight rifle due to no bayonet lug. These models are really cool and quite collectible. If these options exist among any of the individual manufacturer's SKU's they will be listed at an upcharge under the Custom Option selection tabs below while supplies last.